Time Measurement on a Globe

To avoid the confusion that would result if each place used its own local time, the United States has been divided into four time zones corresponding roughly with the 75th, 90th, 105th, and 120th West Meridians. Alaska and Hawaii have two additional time zones. Each time zone differs by one hour. Commencing with the east, they are known as Eastern, Central, Mountain, and Pacific time zones.

Canada has the same time zones as the United States, plus two additional time zones for the extreme eastern part of the country. Standardization of time has become almost universal.

Most globes have a Time Dial at the North Pole. This is a disk that can be turned and is divided into 24 equal parts, corresponding to the Meridians shown on the Globe, and marked to represent the hours AM and PM of the Solar Day. The dial may be used to quickly show the comparative time at any two points on the Globe. 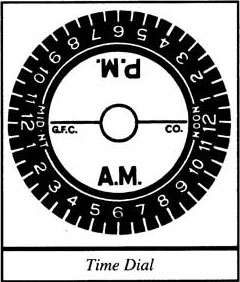 By turning the Time Dial to a position so that any given hour is over the correct meridian, the corresponding time of any other point on the Globe may be determined. For example: the 75th Meridian West passes through New York. By turning the time dial so that 1PM is on the 75th Meridian West, it is seen that 6 PM on the time dial is on the Prime Meridian and therefore it is 6 PM in London when it is 1 PM in New York.
International Date Line

This is often referred to as the Sunday-Monday line and follows approximately the180th Meridian. The date line departs from the 180th meridian sufficiently to pass through the Bering Strait, west of the Aleutian Islands, and east of certain islands near New Zealand.

When it is Sunday on the American side of the International Date Line, it is Monday on the Asiatic side. The 180th Meridian is chosen as the one at which this change should be made because it is farthest from the Prime Meridian.