Measuring distance on a globe 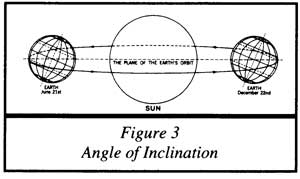 The Earth's axis is an imaginary line passing through the center of the Earth from the North Pole to the South Pole. This axis does not point straight up form the orbital plane. I tilts about 23 1/2 degrees from the straight up position. This tilt is called the angle of inclination (Figure 3) and it remains constant, always tilted in the same direction, This is the reason that the northern tip of the Earth's axis (the North Pole) is always pointed toward the same part of the sky, the North Star.