The earth is in constant motion. Being a planet, it travels around the sun in roughly 365 days, turning around itself once every 24 hours during its solar orbit.

These two motions, the orbit of the earth around the sun within the period of one year and its rotation around itself within 24 hours, constitute the basis for the determination of time.
The Planet Earth Illuminated Globe - Click here to view this globe in our store 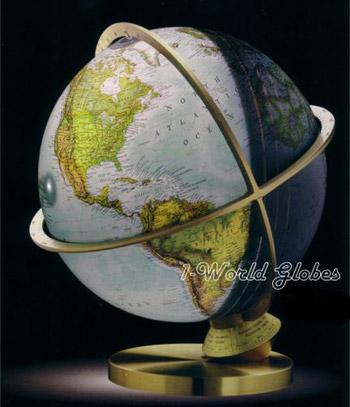 permitting the two motions of the earth to be demonstrated and distinguishing this globe from any other type of globe currently available.

The base of the globe is provided with a scale that adjusts to each day of the year. The ring surrounding the equator and dividing the globe into the Northern and Southern hemispheres is designed as a dial divided into the 24 hours of the day and including quarter-hour intermediate divisions.

By turning the scale, the globe can be set to each day of the year. The index mark on the non-revolving base shows the day set. When slowly turning the annual scale with the light on, the globe shows the movement of the line separating the day-side and the night-side. This constant movement of the line of light, which does not repeat itself until after the passing of one year, after one complete revolution of the earth about the sun, that is, accounts for what occurs in nature. The globe shows the position of the earth in space on its path around the sun. Day for day the earth changes its position with respect to the sun until the cycle is repeated after 365 days.
The time of day

While one motion of the earth, its orbit around the sun, is demonstrated by the annual scale of the globe, the second motion, the rotation of the earth around its axis, is shown by the equator ring, with its effect upon the time of day appearing directly on the globe.

Due to the close relationship existing between the rotation of the globe and the time of day, there must be kept in mind that any rotary movement of the globe signifies a change in time; a quarter turn equals 6 hours, a half-turn 12 hours, and a complete turn 24 hours.

Since all areas of the earth situated on one meridian have the same time, this also applies to the globe. The meridians are blue lines on the map and lead from the North Pole to the South Pole; they are drawn at intervals of ten degrees and numbered below the equator. Read the time of each meridian where the line of that meridian cuts the equator.
Reading the time of day

First of all, it is advisable to keep in mind that on every day of the year all times of the day are present both on the earth and also on the globe at the same time: When it is midnight in Europe, the sun of high noon is shining at the same time over the Pacific Ocean, the sin is rising in some areas of Russia, and is at the same time setting in some areas of the United States. Consequently, any moment of time applies to only a limited area. To read the time of day applying to that limited area at ay moment, all you have to do is read the time indicated on the dial of the equator ring for each meridian.
Twilight

Along the line dividing day and night, the globe--when illuminated, shows the three bright rings illustrating the zones of dawn and dusk, the twilight before sunrise and after sunset. In nature, the gradual passage between day and night occurs without steps. However, to identify the different degrees of illumination while the twilight persists, the three circles outline the following stages:

1st stage:  Civil Twilight is recognized as beginning or ending when the sun is about 6 below the horizon, and is determined by the amount of light necessary to permit outdoor work.

2nd stage:  Nautical Daylight begins or ends when the sun is 12 below the horizon, the illumination being then so poor that the horizon can no longer be seen.

3rd stage:  Astronomical Twilight begins or ends when the sun reaches 18 below the horizon, and when no reflections of the sun's light illuminate the nightly sky.

For the daybreak, the values come in reverse order.
Local Time

As already described in the paragraph Reading the time of day, the Planet Earth globe permits demonstrating the course of the 24 hours of the day. Each complete rotation of the globe ball about its axis equals the passing of 24 hours.

A glance at the dial of the equator ring shows that every two hour-division on the dial include 15 meridians, which are represented in the map as blue lines spaced 10 degrees apart. The time difference for every ten degrees is 40 minutes.

The time that can be read on the globe for every place on earth along a meridian is called local time.

Since large, economically interrelated areas require a uniform time for reasons of traffic and communication, such areas have been combined in time zones. Central Europe is one of these time zones. The official time commonly agreed upon for this area is the local time of the 15th degree of Eastern longitude, which cuts right through the middle of Central Europe. Read the Central European Time (CET) on the dial of the equator ring midway between the 10 and 20 meridians. In this context it must be pointed out that all local times the globe indicates for the large area of Central Europe remain additionally applicable. Occasionally, the times of sunrise and sunset published in pocket almanacs are indicated in local time because the time differences with respect to standard time tend to cause substantial errors. After all, the difference in apparent or local time between the western and eastern regions of Central Europe is almost two hours. 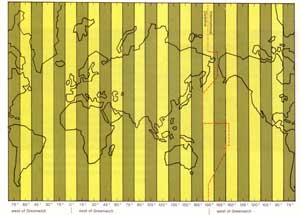 The illustration above shows the pattern permitting vast regions with different local times to be combined, in a simple manner, in time zones having the same standard time. For this, the surface of the earth has been divided into 24 zones extending along the meridians. Each zone has a width of 15 degrees, so that the local time within one zone differs by exactly one hour between the two extremes. The time generally applicable within each zone is the local time of the meridian in the middle of each zone. This system assures that the local times within each zone differ by not more than a maximum of thirty minutes from the standard time. Moreover the change in time when entering the neighboring time zone is exactly one hour.

However, a  look at the CET area, which extends over two zones,  shows that such a system can hardly be reconciled with the practical requirements of the land areas of the world. 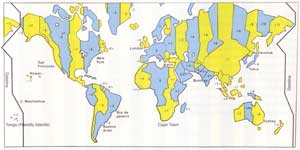 As mentioned before, reasons of traffic and communication make it necessary to have a common time for economically and politically interrelated areas. The map shows how the various areas, based on the aforementioned schematic pattern, are divided into time zones.

The standard time system has been introduced by nearly all countries of the world by appropriate legislation. A number of countries, especially for economic reasons, have adopted a Summer Time (or Daylight Savings Time) for the summer half-year, with the clocks being advanced by one hour.

With the globe illuminated, a bright dot of light will be seen near the 12 o' clock mark of the dial on the equator ring. This light spot marks the area in which the sun's rays cast no shadow in the surface of the earth at 12:00 hours: It is the time when the sun is directly overhead and the respective area is directly below the sun. This is why that area is called subsolar area.

Turn the globe and you will note that ever new areas of the earth will reach the dot of light and become subsolar areas for a short while.

Since the sun must be considered to be  vertically above the dot of light on the surface of the earth,  the observer will (after a little practice) soon be able to estimate the altitude or position of the sun in any region of the earth and on any day of the year.

The dot of light of the subsolar area reveals the significance of the tropics. When the annual scale is turned, the light dot will travel between the tropics and  turn back  after having reached the dotted lines. The annual scale then indicates the time of the  summer solstice on June 21, or of the winter solstice on December 21.
The International Dateline

To understand the significance and function of the dateline, find the dateline on the globe. It is a dotted line leading from the North Pole to the South Pole opposite the zero-meridian. Whenever the dateline is crossed, regardless of whether this be from the east to the west or tin the opposite direction from the west to the east, the date must be changed. So, for example, when it's Thursday, May 6th on one side of the dateline, it's Wednesday, May 5th on the other side.

The simultaneous existence of two different dates is absolutely necessary to permit a uniform date to be counted for the population of the world. For an explanation of this seemingly paradoxical statement turn the globe ball to have the dateline below the 0:00 mark of the world. In this position, the same date is used throughout the world, say Wednesday, May 5. But to keep the date applicable, all areas of the world crossing the 0:00 mark must use the new date beginning on 0:01: Thursday, May 6th. As a consequence, the inhabitants of the Hawaii Islands will witness the forthcoming sunrise on Wednesday, May 5, while their neighbors on the Marshall Islands will date the same sunrise as Thursday, May 6th. at 0:00 o' clock. But shortly thereafter the same process will be repeated: On the Marshall Islands the new date, Friday, May 7th, will commence.

The existence of two different dates at the same time of significance only for those who cross the border or dateline. It makes no difference on what day or at what time of day the dateline is crossed.

Travel agencies offer an attractive air travel arrangement: Anyone wanting to celebrated New Year's Eve on the Fiji Islands is offered a flight to the Hawaii Islands on the course of January 1st. Upon arriving in Hawaii the date is still December 31st, and one has another chance to celebrate the arrival of the new year.

For the occupants of a spaceship, the repeated crossing of the dateline within 24 hours is of no significance. What counts is only the date that has been adopted at the place of the landing in the course of the flight.

Click here to return to the Planet Earth Globe.