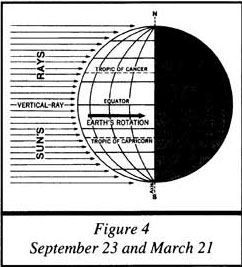 The rays of the Sun can reach only half of the Earth's surface at one time. The sun's rays extend to the North and South Poles equally only twice during the year, on September 23 and March 21. (Figure 4) On these two days the vertical rays of the Sun fall directly on the Equator. From September 23 to December 21, the Sun's rays gradually extend a few degrees beyond the South pole and recede from the North Pole. On December 21, the rays extend 23 1/2 beyond  the South Pole and fail to reach the North Pole by the same number of degrees. At this time, the area surrounding the South Pole known as the Antarctic Circle, receives sunlight and the Arctic Circle, surrounding the North Pole, is without sunlight. 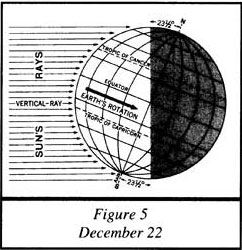 When the light shines directly on the line marking the Tropic of Cancer (23 1/2 beyond the North Pole). Now the South Pole is in the darkness and the North Pole receives constant sunlight. This explains the six-month day and night at the North and South Poles. 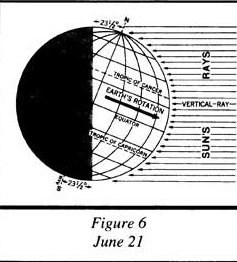 Earth's Position by Months in Relation to the Sun

One-half of the Earth receives the Sun's rays and has daylight while the other half has darkness. As the Earth is constantly rotating (from west to east), the lighted half of the Earth is the same only for an instant of time. The constant inclination of Earth on its axis of rotation while it revolves around the Sun accounts for the North Pole's gradual change from a position of 23 1/2 toward the sun to one of 23 1/2 away from the sun. The portion of the Earth from the Arctic Circle (66 1/2 N) south to the Antarctic Circle (66 1/2S) has light and darkness in every 24-hour period throughout the year. The Areas within the Artic Circle and the Antarctic Circle (23 1/2 from the Poles) have periods of continuous darkness exceeding 24 hours that increase from one day to the maximum of six months at the poles. 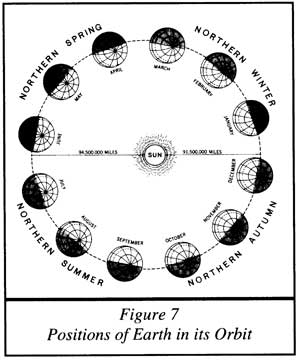 Equinoxes and Solstices determine the seasons. Equinox is a Latin word meaning "equal nights." March 21 and September 23 are called Equinoxes because on these two dates the days and nights are of equal length throughout the world. March 21 is the vernal equinox and September 23 is the autumnal equinox. These dates will occasionally vary by one day.

Solstice is a Latin word meaning "sun stand still." June 20 and December 21 are northern and southern limits respectively and seem to stop for a moment before moving back toward the Equator. June 21 is the summer solstice and vise versa for December 21. In the Northern Hemisphere spring last from March 21 to June 21, summer from June 21 to September 23, autumn from September 23 to December 21, and winter from December 21 to March 21. The seasons are the opposite in the Southern Hemisphere.

The heat of the Sun depends upon the directness of its rays. This explains why it is warmer at the Equator and colder at the poles. It also explains why it is hotter when the sun is overhead then at any other time during the day. At noon, any spot on the Earth's surface is receiving the direct, or more nearly direct, rays of the sun that at any other time of the day. The most intense heat will be found in the area where the vertical rays of the Sun fall.

The rays of the Sun must pass through the Earth's atmospheric layer. When they are falling obliquely, they must pierce more of its atmosphere, and the intensity of their heat will be lessened.

During the summer months in the Northern Hemisphere this atmospheric layer acts as  a blanket to hold the heat in. It would seem that since the Sun's rays have been coming closer since March 21, that June 21 (the longest day of the year), would be the warmest. This is not true. The months of July an August are the warmest months.

During the months from March to June the days have been longer and the nights shorter, but the Earth is so cold from the winter months that it takes time to heat. The Earth absorbs more heat during these long days than it can give off during the short nights.

In July and August, the Earth has absorbed so much excess heat that it must give some off during the days as well as the nights. The atmosphere is then acting as blanket to retain the heat rather than give it off. This same thing is true in the Southern Hemisphere. Although December is the height of summer in this hemisphere, it is not as warm as January and February.

The above explanation, if reversed, explains the winter months in this way: January and February are much colder than December because by the time these months are reached all the heat stored during the warmer months has been given off during the long nights. Because the days are so much shorter than the nights, the little heat that might be absorbed during the day is quickly given off at night.