We often hear the expression, "The world is growing smaller". By that we mean our interests are becoming more worldwide. In everyday reporting of current events we hear from the far reaches of the world. Because of more rapid transportation, quicker communication, computers, satellites, and the vast news gathering and publishing services like the internet, worldwide happenings of all sorts become a matter of daily interest to everyone.

Our Earth is one of the nine planets revolving around the sun. The Earth travels at the speed of 66,600 miles per hour while it moves around the sun. At the same time it spins like a top. Traveling with the Earth through space is a layer of nitrogen and oxygen about 1000 miles thick. This layer of air is called atmosphere and it spins with the Earth as it orbits the sun.

The Earth receives its heat and light from the sun. Light travels at a speed of 186,000 miles per second. The Earth is so far from the sun (about 93 million miles) that one ray of light will travel for 8 minutes before it reaches the Earth.

The globe represents our Earth in miniature. In order to fully understand geographic information, we need to have a clear picture of what the Earth (and the specific area we are investigating) looks like. Because a globe is round, and has three dimensions like the Earth, it portrays true comparisons of size, shape, location, distance, and direction. Maps and atlases, because they are flat and only have two dimensions, show distortions of the Earth's physical features. It is impossible to represent a round object on a flat plane without distortion.

Although some globes feature "raised relief" surfaces (that means that you can feel the mountains), we should understand that the highest mountain on the Earth (Mt. Everest, elevation 29,028 feet) would feel like a grain of very fine sand on a globe twelve inches in diameter. the deepest trench in the oceans (39,198 feet, lying east of the Marianas Islands) would show as a dent equal to the thickness of thin paper.

For the proper understanding of elemental geography, including the relation of our Earth to the Sun, and a more intelligent understanding of world news - nothing can take place of a reliable globe. One should be in every home, in every school classroom, and every library.

The Earth is almost a perfect ball. The Earth is slightly pear shaped - peaked at the North Pole and bulbous at the South Pole. The technical term for the shape of the Earth is an oblate spheroid.

The Following chart shows the difference in several measurements. These differences are why the Earth is not a perfect sphere: 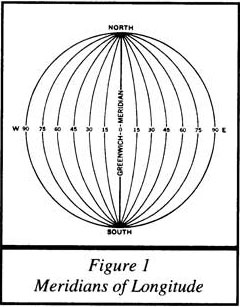 Meridians of Longitude are imaginary lines running through both poles. On globes, meridians are usually marked at intervals of 15 degrees, starting with the meridian that passes through Greenwich, England. This meridian is numbered zero and is known as the Meridian of Greenwich, or the Prime Meridian. (Figure 1).

Parallels of Latitude are imaginary lines running around the Earth parallel to the Equator. The Equator is the zero parallel and it is the same distance from both the North and South Poles. (Figure 2). The equator divides the Earth into the northern and southern hemispheres. On a globe, parallels are usually shown ten or fifteen degrees apart starting with zero at the Equator and ending with 90 at the North and South Poles.


Learn about measuring distance on a globe.