The Analemma or vertical sunray indicator is the diagram of the large figure 8 in the Pacific Ocean. (The Analemma is not shown on some globes.) For every day in the year, the Analemma show the latitude where the Sun's rays are vertical and the Equation of Time, which tells whether the clock is ahead or behind the Sun. 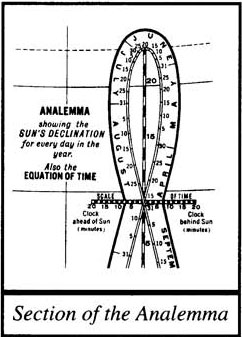 One can easily discover where the Sun's rays are vertical on specific days. For instance, on December 21st, one finds the latitude to be 23 1/2 south. That is, on the entire Tropic of Capricorn the Sun's vertical ray is falling sometime during the day. The Equator crosses the Analemma on March 21st and September 23rd, indicating that on these days the Sun's rays fall directly on the Equator.

The term Equation of Time shows the difference between mean solar time (clock time) and solar time (Sun Time). It is shown by a horizontal scale of time. A good watch and the sun do not keep the same time. According to solar time (sun time) a day may vary in length from 23 3/4 hours to 24 1/4 hour, whereas according to the mean solar time (clock time) it is always 24 hours long. Stretching a piece of paper parallel with the nearest meridian from a certain date to the scale of time will show how much ahead or behind clock time the sun time is. For instance, on November 2nd the Sun is 16 minutes fast according to clock time and on February 11th it is 14 minutes slow. Mean solar time match on June 20th, April 14th, August 30th, and December 20th.