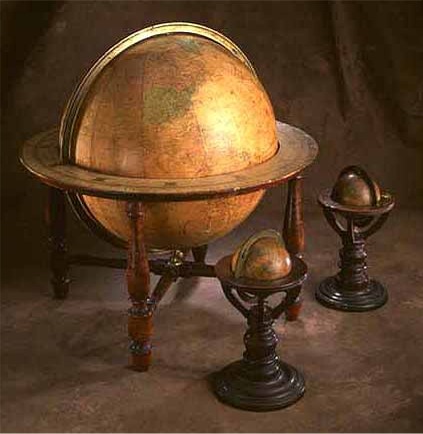 The three globes shown here were produced by James Wilson, America's first commercial globe maker. Born in New Hampshire in 1763, he spent much of his adult life as a farmer and blacksmith in nearby Vermont. After seeing a pair of terrestrial and celestial globes at Dartmouth College, he decided to make his own. He set about learning geography from an encyclopedia he purchased for the purpose and learned engraving from an experienced engraver of maps. Around 1810 he had produced his first globe, and by 1818 he and his sons had established an "artificial globe manufactory" in Albany, New York, where they produced globes of three-inch, nine-inch, and thirteen-inch diameters.

In 1827 he brought his globes down to Washington, D.C., to display to Congress. On his business card he wrote that he was "now exhibiting for public inspection at the United States Library of Congress" a pair of thirteen-inch globes, and claimed he was "the original manufacturer of Globes in this country, and has brought the art to such a degree of perfection, as to supersede altogether the necessity of importation of that article from abroad."

The two smaller globes shown here are an undated pair of three-inch terrestrial and celestial globes probably published in the 1820s. They were purchased by the Library of Congress in 1940 from Harold F. Wilson, a descendant of the globe maker. The larger thirteen-inch globe is one of Wilson's earliest dated globes (1811), and was a gift to the Library of Congress in 1991 by the estate of the noted globe and map collector, Howard Welsh.