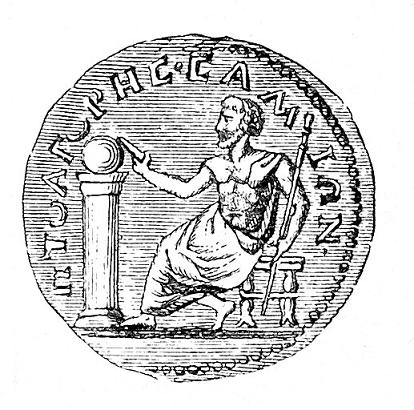 The average person in Hellenic and Roman times knew that our world is round. Th philosophic inquiries and dialogs that began with Thales reached their peak with Aristotle. Later, various hellenistic astronomers made measurements of the size of the Earth and the sizes of and distances to the Sun and Moon. Several schemes for explaining the motions of the planets were invented. Generally, the average person of those times did not believe Earth to be flat any more than the average person of our day believes that we are alone in the galaxy.

Pythagoras  was probably the first to assert that Earth is a sphere. The other candidate for originating this insight is Parmenides of Elea. However, later than them, Anaxagoras of Klazomenae said that our world is "cylindrical", i.e., shaped like a modern coin. Democritus agreed. In his books, On the Heavens, Aristotle notes the reasons offered by Anaxagoras and Democritus for asserting that Earth is flat.  Then he argues against them, and states:

For Aristotle, the Earth was round. So it remained for perhaps 1,000 years. Aristarchus of Samos measured the size and distance of the Moon and Sun. He also placed the Earth in orbit around the sun. Archimedes of Syracuse argued against this on the soundest of principles: parallax. If Earth orbits the sun, then there should be an apparent shift in position of the stars relative to the sun and this had not been observed. Eratosthenes of Cyrene measured the circumference of the Earth by comparing shadows on the first day of Summer.

Celestial devices appear on coins from the classical period forward.   There are many such examples of stars, astrogali, solar disks, etc., on coins. The earliest coins that have terrestrial globes on them are from Uranopolis ("Sky City") in Macedonia, which was founded on Mt. Athos about 300 BCE by Alexarchos, brother of the king Kassander. Catalogued as BMC 5.1, et seq., (Sear GCV 1474, et seq.), they show Aphrodite Urania seated on a globe.

Struck during the reign of Trajan, a coin from Samos honors Pythagoras (BMC Ionia Samos 237). The reverse shows Pythagoras touching a globe with a wand. This same theme appeared on coins struck for Septimus Severus, Julia Mamaea, Trajan Decius, and Etruscilla. The Severans relied on even more heavily on astrologers than the average person and the assumption is that this caused them to honor Pythagoras as no one had before. Since the globe appears without a diety such as Sol or Jupiter or the emperor, we can assume that these globes represent our planet. And, indeed, unlike Anaxagoras, Pythagoras really did assert that Earth is a sphere.

Of course, many Roman coins have globes on them. In an article in THE CELATOR for November of 1991, G. Derk Dodson suggested that not all "globes" are representations of the planet. Dodsons's thesis is that some of them are "lumina" or halos. These are balls or circles of holy light that deify. Dodson cites many examples of the emperor being handed the symbol of his deity. Even so, not all globes are halos. Halos don't sit on the ground. A globe at the foot of Providentia is a globe.

Once I started looking for globes, they became easy to find. I have a Providentia/Globe denarius from Marcus Aurelius and another from Trajan, both for about $50 at the ANA Denver. The denarius of Trajan commemorates his victory over the Parthians. The globe at the foot of Providentia even has a chain around it: the world wrapped and ribboned for Rome.

Also in my collection are two quandrantes from the time of Vespasian. One is a contemporary counterfeit of the other. One side has a caduceus, the other a globe and rudder. At the ANA Cleveland, I found a pitted and cleaned example of the Uraniopolis issue. For me, this little dog is one of my pride- and-joy coins. It proves that in ancient times, everyone knew that the Earth is a ball.