The unique construction process used for the acrylic Artline globes creates a highly versatile model of our home planet that enables you to use it in a variety of "hands on" ways that are not really possible with ordinary globes. Because of the smooth outer surface, these globes are markable with a grease pencil or dry-erase marker, and these markings can be easily altered or removed. As a result, geography will take on new dimensions for you and your family, as well as for the school teacher and pupils for whom this subject will really come alive.

So many people today travel far and wide, including to once inaccessible distant lands that one could otherwise only read about. A world globe like this can become a valuable permanent souvenir of your worldly wanderings. You can add not only the places you've been to - with small stick-on labels of press-on transfer lettering - but also the paths of the plane or ship you traveled on; this can be done either with grease markers, or for better appearance, any of a number of artist's stick-on tapes which are available in a great variety of colors, patterns and thicknesses. All such materials are readily obtainable at any art supply store. And - bet of all - none of this will harm the globes' highly durable acrylic surface.

Morevoer, the Artline globes' transparent/translucent see-through feature (except the Onyx and Blue Pearl colors), is a major geographical bonus not available with ordinary globes. For example, even in this day and age many people, especially youngsters, still believe that if residents of the United States could dig a deeper and deeper hole through the Earth without stopping, they would eventually come out in China. Look at your globe and see if this is true. You can, at a glance, see what is opposite any part of the Earth, and a great deal more.

What is most important is the way the globe shows you the true relationships between countries and continents in a way that no flat map can do. All maps distort the surface of our round Earth on way or another, since it is impossible to flatten any sphere without stretching, tearing or otherwise distorting it. Try flattening the skin of an orange onto a tabletop if you question this. So all flat maps distort the round Earth one way or another, and the more area the map covers, the worse is the distortion.

If, for example, you looked at a map of the world you might get the idea that the shortest route between the united states and Japan is straight across the Pacific Ocean. Later, should you decide to take this trip by plane, at some point in mid-flight your captain might call your attention to the terrain of Alaska outside the windows. Why would you be near Alaska when you can see from the world map that the shortest route is straight across the Pacific?!

Airplanes try to follow what is known as the "Great Circle Route" -- what is truly the shortest distance between two points on the curved Earth. Although navigators utilize mathematical procedures along with sophisticated inertial guidance systems to trace out these great-circle paths, you can readily find them on your globe with a strip of stiff paper or even a flexible tailor's measuring tape. To get the approximate distance along your path, you can calibrate your scale or tape by the degrees of longitude along the globe's equator or seam; each 15 represents approximately 1,050 miles. Why not plan your own trips around the world visiting far-off continents and plotting your courses and distances on your globe, or trace Magellan's voyage around the globe, etc. 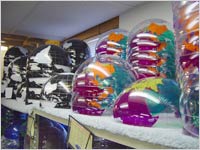 Where a flat map or atlas really becomes useful is in detailed study of particular countries of regions, for which these maps are usually considerable more complete than the same area shown on a globe. When focused on a finite, limited portion of the Earth, the distortion factor of a flat map hardly matters at all, just as you would have no difficulty flattening a small pieces of orange skin on a table.

So -- we have here tried to give you some idea of the innumerable ways this unique product can help you understand your home planet better and to make you appreciate and enjoy your travels upon it more. The following articles will describe some of the basic facts and relationships pertaining to our Earth as shown on the globe.


Next: Locating Places on the Earth

Jump to other articles on subject:
The International Date Line
Tropics and Climate Zones
The "China Syndrome" Myth