When Paul Oestergaard created the publishing house in Berlin, in 1909, his vision was to bring high quality reference globes into the homes of the public. A Columbus globe for each home was 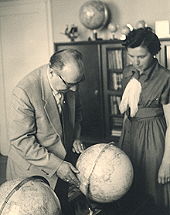 the idea he had in mind, and the philosophy that globes should not be exclusive to the wealthy. These were among the highest quality globes ever produced, and offered at an affordable price so that all could enjoy their superior cartography. The globes were produced in 24 languages, and were sold all around the world. Production constantly grew, as did the staff. Within only a few years the international demand for these excellent globes outgrew the factory's supply capabilities.

During the second world war, the Columbus administration and manufacturing facilities were badly damaged, as well as the Oestergaard family household. It was Paul Oestergaard Jr. and the remaining work force that moved operations to Stuttgart. Shortly after this move the DUO globe was patented. This was the first time that two map versions were shown on a single globe by using internal illumination.

In 1963, the third Oestergaard generation took over the company. Peter Oestergaard was a machine builder by trade, and helped develop the revolutionary duplex globe. This was a milestone for not just Columbus globes, but for the entire globe industry, as it was the first plastic globe produced, and was made using a mostly-automated manufacturing process.

In 1972, a new development simply called the Planet Earth globe was introduced. This was arguably the most information-rich globe ever produced, featuring a visual display of day, night and twilight, as well as the cycle of seasons.

After the re-unification of Germany in 1993, Peter along with his son Torsten Oestergaard, recognized a need to speed up the process of updating cartography to match the speed of our changing world. It was then decided to move to a digital format for maintaining cartographic data and to move facilities again into a more efficient, all-in-house production facility, where the Oestergaard family could have more direct control of the final product.

In 1999 Columbus Globes took over another specialty globe maker who was among the last still producing hand-laminated, mouth-blown crystal spheres for cartographic globes. The acquisition of this manufacturing process has essentially preserved this particular method of globe making from going extinct. The cherished glass globes are still offered today thanks to the foresight of the Oestergaard family. It was also in 1999 that Columbus Globes was granted the exclusive license to produce globes for the National Geographic Society, which they still hold today.

In 2000, Columbus globes shocked the globe industry once again with their development of the first electromagnetic levitating globe.

Columbus Globes is the worlds oldest continuously running globe manufacturer. For nearly a century the Oestergaard family has continuously innovated and revolutionized the globe making industry.

The experience accumulated over 4 generations of globe making has earned the Columbus brand the status of the worlds premier globe manufacturer. Popular features such as internal illumination, dual-mapping, and the invention of the acrylic globe spheres were all innovations brought to us by Columbus globes and the Oestergaard family, and are all common features across many of todays globe manufacturers.

Today, Columbus Globes slogan -- Experience the World is an exemplary phrase to describe the feeling one gets when in the presence one of their outstanding products. 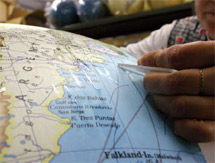 While being innovators and leaders in the globe making industry, Columbus Globes is a company that is also focused on conservation of the planet we all share and live upon. Due to their commitment to the environment, Columbus carefully chooses materials not only for their high quality, but also considers their ecological impact. Woods used on the floor globes come from renewable sources, and are finished with special formaldehyde-free lacquers. The plastics used are the highest quality, 100% recyclable ABS materials. Cardboard materials used in packaging are also 100% recyclable.

Columbus has also preserved a manufacturing process that would have otherwise gone extinct in this new world of automated production. Their exclusive mouth-blown crystal spheres with hand laminated cartography are among the finest examples of globe-making available anywhere. The raised-relief mountains on these are individually added as bits of hand formed clay, and adhered to the sphere before the map is layered on a skill that takes a steady and very experienced hand. Again, an effect that would simply be impossible using automated methods.

There are no products listed under this brand.