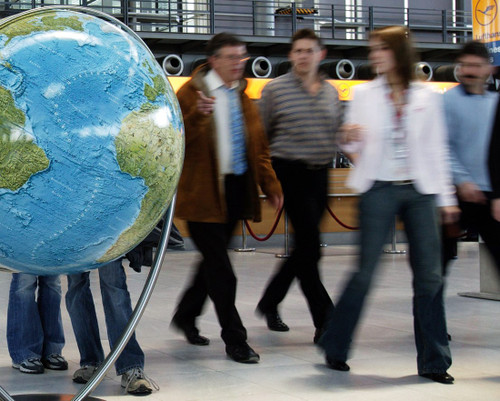 Behold the world at your fingertips. No other globe comes close to the magnificence of the Columbus Magnum display globes. Designed by and built in the world's oldest globe manufacturer in Germany, each globe is a result of over 40 working hours by skilled craftspeople. The sphere diameter of the 40" Magnum is significantly larger than any other production globe available anywhere. This globe, towering at 68" in height, is a perfect addition to a corporate headquarters lobby or in a publicly used space.

The Magnum 31" Floor globe is an outstanding example of a display globe suitable for a library, museum, or any public high visibility area. The slightly shorter 50" height is a more approachable height for children, with the equator right around 33". These huge illuminated globes are offered with a choice of a physical/political satellite image map, or with a highly detailed political map, both are shown to the right. The satellite image map has outstanding visual relief of landmasses and ocean floor bathymetry. The political map features countries in contrasting colors with ocean currents and major shipping lane routes indicated. Both globes feature thousands of place name labels.

A modern brushed stainless steel fork stand holds each globe at a 23 degree angle in a full-circle meridian that allows the globes to freely rotate 360 degrees. The meridian is capable of pivoting about 10 degrees in either direction. Electrical cord routes from the base.