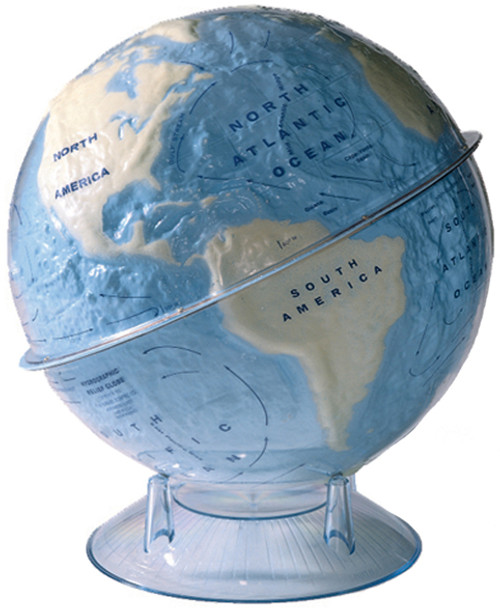 This Hydrographic Relief Globe is actually a model of the Earth with the land areas raised to show the mountains, plains, and valleys. The ocean surface is represented by clear plastic through which may be seen the continental shelf, basins, ridges, and trenches that comprise the ocean floor. The Ice Cap in the Arctic Ocean is shown by a textured surface through which may be seen the ridges and basins. The continents are named on the globe as well as the oceans, major ocean basins, ridges, and currents.

The height of the mountains and depth of the oceans has been exaggerated on the globe in order to make the differences in elevation apparent. If there were no exaggeration, the highest mountain in the world would stand only as high as a piece of ordinary paper. The vertical exaggeration is 40 to 1. As a result of the vertical exaggeration, some slope angles appear much steeper than they really are.